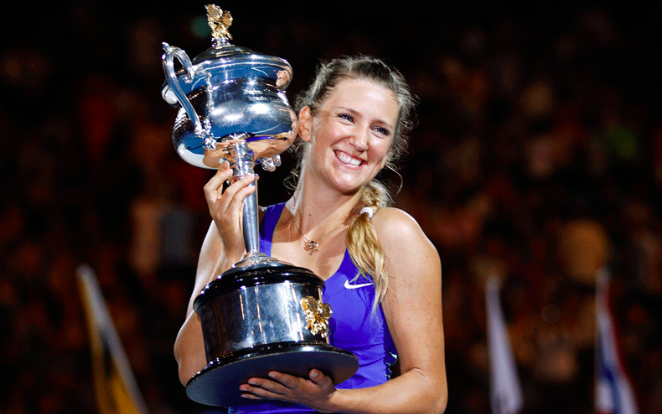 The Belarusian saw off Maria Sharapova in straight sets dropping three games as she won her first of two back to back Australian Open titles. In 2013 she did it from a set down against Li Na and is still the latest player to defend their title in Melbourne.

Since then she has had a mixed time in Melbourne with two round one exits and not won a match there since January 2016, it has been tough at times and in 2019 she broke down in her press conference in what was an emotional time but a massive show of strength.

It showed that players are human and go through the difficult times to get to the good times and it was questioned whether we would see these times again.

I’ve always had the upmost respect for Vika, her honesty and how she is soo relatable to people is refreshing, she said something in that press conference in 2019 which I won’t forget:

Vika needed some “Time, patience and a little support”

For me this press conference was a wake up to how players are feeling, they are human and have this ‘privilege’ which we call it of travelling the world but it’s pressure and is being on the road all the time a privilege?

In the last couple of years in particular the backend of 2020 we have seen Vika play some of her vintage tennis, it is brutal and delightful to watch and it has seen her climb the rankings back to a seeded position for a major and a runner-up at the US Open, winner at Cincinnati and at the end of 2021 the runner-up back at Indian Wells.

She has been playing well, it has been in bits and pieces in 2021 but she has that experience and these good results in the bank to call upon, Vika may not have won a match at the Australian Open since 2016 but could she win her third Australian Open and Grand Slam title a decade on from her first?