The 2017 ATP World Tour Finals were an example that the impossible is a possibility.

Nadal and Federer led the line but soon things changed with Rafa pulling out injured, Roger making it to the final four and youngsters Zverev and Thiem falling in the round robin.

Sixth seed Grigor Dimitrov danced his way around the O2 Arena to win an unlikely but totally deserving title against the seventh seed David Goffin.

Tennis is about taking opportunity and to be at the Tour Finals is no fluke, it is a measure of the success of the season.

Having defeated Dominic Thiem in three incredibly tense sets the Bulgarian thrashed David Goffin 6-0 6-2 but the Belgian’s wins over Thiem and Nadal saw him safely through.

Rafa pulled out injured so Grigor’s last match was against Pablo Carreno-Busta who came in as an alternate but lost 1&1 to Dimitrov.

Throughout the tournament there were only two bagels handed out, both by Dimitrov. One of them was to Goffin in the round robin and the second was against Jack Sock after Grigor came from a set down in the semi-finals to win!

Next up was Goffin again but despite losing 0-6 2-6 the Belgian put up a good fight but the Bulgarian was relentless all week ending his season as world number three and unbeaten at the World Tour Finals in London.

The whole week from Dimitrov was exceptional. I remember saying at the time when he beat Dominic Thiem in the round robin the difference was the ruthlessness of the Bulgarian.

Both Dimitrov and Thiem in their round robin match showed the flashy side to the their respective games but I felt that Dimitrov was a little bit more focused and played the point and not the occasion.

It was a good but unusual season when you look at it on paper. Grigor made his first semi-final at the Australian Open and then later in the year won his first Masters 1000 title in Cincinnati.

I said at the top of the piece this sport is about taking the opportunity when it comes to you and he did that.

Amazingly he won a Masters 1000 and made the semi-finals of the Australian Open without facing a top 10 player. 2017 was his best season for top 10 wins recording eight across the year but three of his eight came in his first tournament of the year where he won in Brisbane and the final five came in the last tournament of his year in London. Quite amazingly in the 21 tournaments in between there wasn’t a top 10 win! 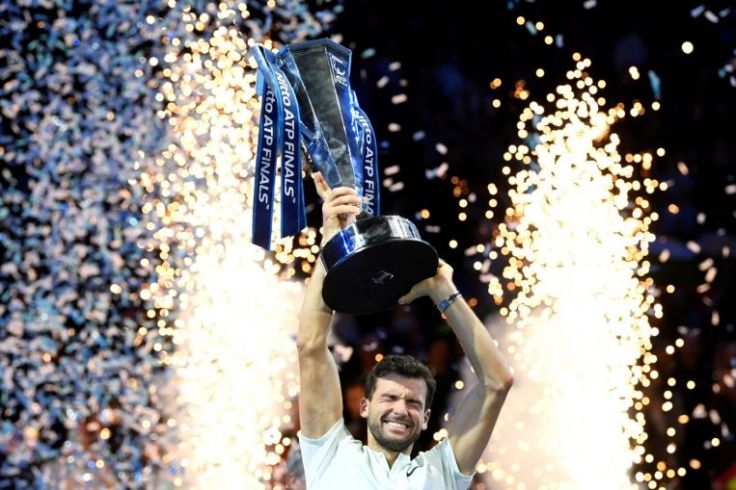