Carlos Alcaraz has really made an impression on the ATP tour this week in Rio. The 16 year old Spaniard sealed a first win on the tour on his debut at 3:00am in the morning down in Brazil and has created many records this last year.

Last year at the age of 15 he defeated Jannik Sinner in Alicante becoming the first player born in 2003 to win a challenger match, he also became just the fifth player aged 15 or under to defeat a top 200 player in the last 20 years in mens tennis.

His win against Albert Ramos-Vinolas also meant he was the first player born in 2003 to win an ATP main draw match.

On Wednesday night the Spaniard lost to Federico Coria from Argentina 6-4 4-6 6-4. Coria ranked at 116 came through qualifying in Rio and is now in the quarter finals in Brazil.

Carlos is a big fan of Rafael Nadal but basis his style on Roger Federer and told the ATP tour this:

”I like to play very aggressively, with a lot of winners. My style is more or less like Roger Federer’s, aggressively coming to the net and playing a lot of drop shots,”

Despite the defeat to Coria the performance once again was faultless. There was just soo much to enjoy from it: his net play, scope on the forehand and his backhand. The variety he played with for someone just 16 years old is fantastic and I’m just going to take a look at some bits that impressed me.

I do sometimes feel when younger players break onto the scene the two-handed backhand in particular is a bit of an undeveloped shot and something many look to build on in their early years but Carlos looked very assured behind his.

In neutral rallies he did a very good job at pushing his backhand deep without pressing and this sent his opponents back a little bit.

The height he was clearing the net at, mixed with the top-spin and the good depth meant that his opponents could pummel it back across the court. Sometimes with a looping top-spin shot it can come back faster but Carlos didn’t send it with extreme power as if you were to hit a winner but with a gentle but effective push. 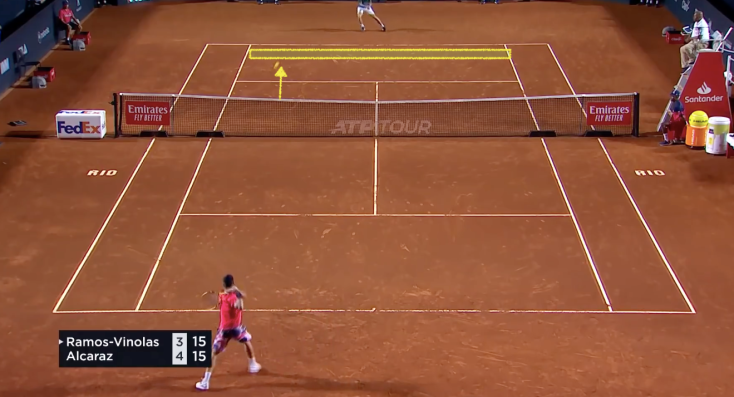 You can see the net clearance from the arrow and how deep he is hitting his backhand from which then translates on the other side of the court to a deep shot which is brave but well done.

The top-spin takes some of the pace off and skids off the clay and you can Ramos-Vinolas at the top having to shift backwards to get ahead.

This above is all setting up that aggressive backhand he wants to take on. The way he just kind of slaps the ball cross court and down the line is so impressive.

It is the perfect preparation to hit the winner from the teenager.

Right foot planted, left leg will follow through, back and arms are straight ready to snap the ball cross court. Very much like Djokovic, Murray & Goffin in how they step up to strike that killer backhand.

Scope on the forehand

No matter where he was he looked comfortable on the forehand. Inside-out, inside-in, cross court, down the line or from a deep position on the court he remained consistent in his hitting and importantly his depth.

He has so many opinions but that area is where he makes the first bounce, it doesn’t have to be deep but it comes through at pace from this position but can also angle it well with less pace to pull you around the court.

His game was incredibly impressive to watch. He likes to come to the net and shows good skill from the baseline or net with his drop shots and he plays his tennis thinking a shot ahead and making sure everything is covered.

Carlos is coached by former world number one and Roland Garros champion Juan Carlos Ferrero who believes the 16 year old can become one of the best and over the next couple of years will push up the rankings.

He began his week ranked at 406 in the world and come Monday should be around 315 in the latest rankings. He has shown his pedigree on clay and I wouldn’t be surprised if ATP 500 in Barcelona and Masters 1000 in Madrid are looking at a potential main or qualifying wildcard.

3 thoughts on “Carlos Alcaraz, the Spanish teenager with a mature game stars on ATP debut in Rio de Janeiro!”