Following last night’s match I did a piece this morning looking at the performance of Novak Djokovic in his 6-4 6-4 win against Roger Federer but now a look at Federer’s performance which has raised a lot of questions and placed doubts with Flushing Meadows around the corner.

The performance on a whole was shaky and nervous which are words you don’t really associate with Roger. He seemed rushed early on and in a panic.

From the beginning of the match Federer saw it would be a challenge to shift Novak off the baseline and knew if he were going to make in-roads then he would have to find the forehand but over-cooked it early on and that set the tone.

Roger is usually so effective and importantly clever and difficult to pass at the night but got picked off time and time again.

An amazing stat from the match about net points won;

The fact that Novak was at the net once says it all and only 52% win for Roger isn’t good at all.

There was a game at 3-3 in the second set which summed it up. 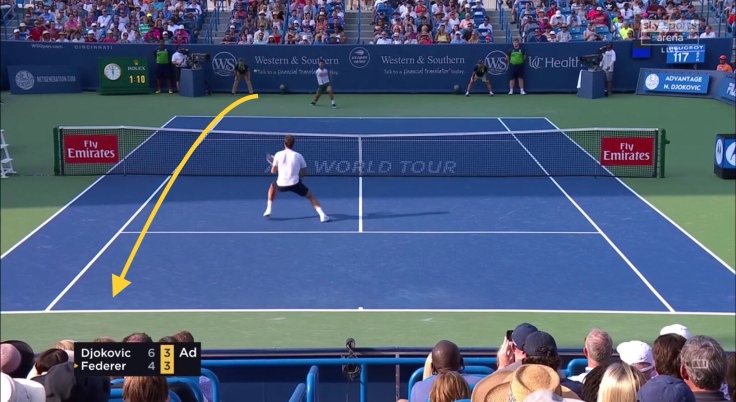 Federer was up 40-0 and even at this point the panic was there in his game. He didn’t seem comfortable at the net or going forward once he served and it got messy.

Djokovic came from 0-40 to break point in a couple of minutes and a naïve approach from Federer cost him big as from there on in the win turned into a formality for Novak.

You can see the graphic above. Federer has served down the T, Djokovic gets it back but it’s a little short.

Look how far back Novak is behind the baseline. Roger ran around to play the inside out forehand and came forward leaving himself in no man’s land and he got passed down the line.

Federer throughout the week had seen his serve come back with interest but only just got through against Stan and Goffin had to withdraw at 6-7 1-1. 57% out wide on the AD court came back, 40% on deuce and down the T throughout the tournament he went for it but took the pace off and didn’t commit.

Djokovic returning his serve well unsettled him and led to a panic with Novak winning 49 points under 5 shots compared to 35 from Federer.