Andy Murray pretty much strolled to victory against Bernard Tomic and after Murray was broken serving for the first set at 5-3 there was a moment in the set at 6-5 15-0 in Murray’s favour on the Tomic serve where the set turned.

The court in Glasgow is incredibly slow which I would say suits both players but Murray has the better weapons and something he used well during the match was the sliced backhand it took the pace off the ball and gave little to get power behind.

Murray did get a bit of luck with the ball hitting the net cord and slowing down (as shown with the red line) however Murray had to quickly change the direction he was running and move up the court. 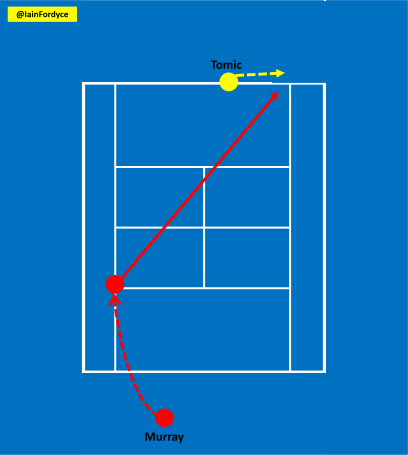 He did this well and in this position many players may smash the ball back but leave the other side of the court open and will still be on the defensive however Murray played it so well. The sliced backhand allowed Murray to follow his shot in and turn to defence into attack.

This left Tomic on the back foot and surprisingly was running round the backhand corner to hit a forehand instead of go for the more natural backhand from that side and ended up hitting it into the strike zone of Murray who put it away with a lovely volley to go 30-0 up and just two points from the first set which he won.

One thought on “How the sliced backhand helped Murray beat Tomic in Glasgow!”